Concurrent submissions to conferences and journals

One of the norms of manuscript writing and paper submission I came across as a graduate student was the general process of submitting a manuscript to a conference, presenting it to an audience (assuming it is accepted), get substantive feedback, revise the manuscript into a ‘better’ version, and then submit it to a journal. This seemed a very logical sequence to me at the time. However, it became apparent from my early and current conference attendances that this is not the case.

The catalyst for my realization was one presentation I attended where a well-known communications scholar presented a work and the last PPT slide included a journal reference to the presented work that was “in press” with a well known journal. My initial thought was: Aren’t we not supposed to submit published work to conferences? I guess this depends on whether “in press” is the same as “published”. But nowadays “in press” articles are usually published as “online first” articles as the manuscript is held in the queue/line for an issue number. Interestingly, ICA and AEJMC seem to have different policies about this judging from the most recent CFPs:

AEJMC 2016 CfP
“Papers accepted for the AEJMC Conference should not have been presented to other conferences or published in scholarly or trade journals prior to presentation at the conference.”

AEJMC is quite specific though it is not clear whether “published” also includes “online first” versions. ICA appears more strict given that even “accepted” manuscripts need to be disclosed, though leaves the ultimate decision to the Divisions.  In any case, I can understand the logic of concurrent submissions. For example, the ICA submission deadline is usually early November and the acceptance/reject results are announced in January. Then the work is presented in mid-May at the conference. Assuming feedback is collected and the manuscript is revised then it can be ready to submit to a journal in June. Basically this adds up to around 8 months even before the manuscript goes through the whole journal review process which can take up to a year — assuming that the first journal it is submitted to eventually accepts the manuscript! For early scholars and graduate students in particular, where there is extra pressure to get work published, the timeline may be simply too long. Added to this is the common acknowledgement that the quality of conference paper reviews are generally quite poor. Therefore, it is understandable that people would forgo whatever benefits/feedback one may get from the conference for a quicker manuscript decision from a journal.

In my case, I generally follow the ‘ideal’ path in situations where the Division/Interest Group I submit to includes a Respondent, such as the Political Communications Division at AEJMC which does a great job of arranging senior scholars to give comments on the accepted papers at the conferences. These are great opportunities to pick their brains and get some additional ideas and insights, which can help improve the manuscript. In other cases,  I do submit both to conference and journal at the same time — not exactly but maybe a few days/a week apart. The assumption is that the 8 month time period can be used “in parallel” for the journal reviewing process. Given that two rounds of reviews and final decisions take much longer than 8 months the chances of the journal article being published or even “in press” at the same time as the conference presentation is very remote. The only possibility of such a scenario is if the journal review process has already been underway for a while before the same manuscript is sent to a conference. Things get interesting of course if the conference paper gets rejected because this adds to the timeline if the manuscript is to be sent to a later conference. Though I have not been in such a situation and I would personally never submit a paper to a conference if it is already far into the journal review process (e.g. revise and resubmit).

One of the more time-consuming aspects of writing a manuscript is the visuals. Interaction plots for example are often included for most studies that include interaction/moderation effects. SPSS has a nice Graph Builder tool that facilitates the drawing of plots and provides a degree of customisation, but sometimes it is necessary to dig into SPSS code. One example is a study of mine on spiral of silence which looks at variables that lead to less expression. But because I wanted to emphasise the idea of greater inhibition I wanted the y axis of the chart to start with positive values leading to negative values. Not so simple with the mouse-click SPSS! Thanks to Google however (search term “spss graph reverse axis”) the solution was quick to find – just a minor modification of the SPSS script with the SCALE command. Just one of the many on the fly things that a researcher has to go through when writing a paper — and its good to learn something new in the process!

My first book chapter titled Exploring the Potential for Mobile Communications to Engender an Engaged Citizenry: A Comparative Study of University Students in China, Hong Kong and Taiwan (co-authored with my colleagues Francis Lee and Hsuan-ting Chen) has been published in Ran Wei’s edited volume Mobile Media, Political Participation, and Civic Activism in Asia: Private Chat to Public Communication. One thing about publishing in journals nowadays is that authors (at least in my case) do not get the hard copies anymore – just a finalized pdf file. So its an extra nice feeling to actually get a physical copy of something I wrote.

Very pleased that three of my works based on my first GRF grant “The use of social media for political and civic engagement: A study of Hong Kong citizens ” are currently in press:

Links to articles are in the “Research” section. Actually, it is only when I entered the articles into this site that I realized that many of my paper titles follow the same style — which is basically “Cause + Effect: Examining/Exploring the role/impact of IV on DV”! Maybe I have to be more imaginative with my future titles?

After three long years one of my early papers Social identity gratifications of social network sites and impact on collective action participation has been accepted by a journal (Asian Journal of Social Psychology). It was one of the first term papers I did in the first year first semester of my PhD studies and I always thought that it was a ‘good’ paper in the sense that it made some important theoretical contributions and addressed an important topic on social change. Here are some notable experiences in getting this article to publication:

Overall, I have lost count the number of hours I have spent on this paper and each successive rejection made it harder to motivate myself to push it towards publication, especially because the quality of some of the reviews were far from desirable. However, I really believed that the manuscript had something important to say. So it is great that my perseverance eventually paid off. So, while the journal review process is not by any means perfect, the current improved manuscript would not have been possible without it.

Met with co-author in Washington D.C. 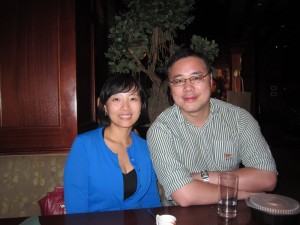 Nice to meet up again with my co-author Jing Guo after three years. When we first met at the AEJMC 2010 conference we were still somewhat fresh PhD students! Jing has since graduated from the University Of Maryland.

Of the total 10 ICA/AEJMC conference papers I have presented so far, 4 of them have been in the form of “poster sessions” – a 40% rate! Here are a couple …

My research examines social identity processes and the uses and impact of communication technologies on individuals and society, focusing on the areas of collective action, democratic engagement and quality of life.